It’s a strangely sweet and innocent romance that is portrayed between them. Is the woman kneeling at the skeleton’s feet pleading with him, or in loving adoration? Are those boney arms of death tightly wrapped around the nude maiden’s flesh done so in a passionate embrace of lust and longing, or aggressive entrapment? Who is leading who in the linking of life and death, and how willingly does the live partner accept the hand of death? 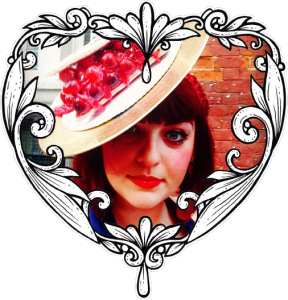 Nikki Shaill aka Raven Rouge is Director and co-founder of Art Macabre. An artist, curator and freelance events producer, she has run “Death Drawing” salons since 2010 and is passionate about the power of art as a means of exploring death, life and beyond.

Woman lies on a velvet sofa, naked with a mischievous smile on her face. Her legs are playfully extended up in the air, her foot directly in the face of a skeleton companion sat next to her on the sofa. It is quite the scene. Sounds familiar?

This iconic image was photographed by Franz Fieldler in 1922, as part of the ‘Fool Death, My Playmate’ series taken in his studio featuring a nude model and human skeleton posing together in various striking ‘necromantic’ poses. It has been a favourite of mine since I started Art Macabre Death Drawing events five years ago. We have used it in various marketing campaigns and talks. So we were thrilled to be able to bring it back to life with our own deathly restaging of the scene two weeks ago.

Creating our own 21st century version of this image, along with several other scenes inspired by Franz Fiedler’s surreal and playful images, was part of the ‘Death and the Maiden’ Dead Meet special at Barts Pathology Museum. Whilst the 75 participants sipped on the Mortini (™) cocktails, created by Dead Meet’s Carla Valentine and Lozzy Bones, and listened to a specially created soundtrack, they sketched our skeletons and nude female models in their own unique original Death and the Maiden artworks across two hours.

Our two models, Carla and Kate, posed in recreations of Fiedler’s ambitions poses. Often for a lot longer than would be required to take a photograph, even in the 1920s, our two live models posed with their dead companions to be drawn. The models brought emotion and drama to their poses, as we directed them to imagine that our skull and skeletons were the object of their affections, and the participating artists added even more life and animation to the scenes as they used their imagination to turn the skeletons into the figures of death and added scenery of flowers, text and other adornments in their creative depictions.

Both beautiful and macabre, surreal and yet strangely familiar, I have been a fan of Fiedler’s rare photographs for a while. Fielder’s work is classic example of Death and the Maiden artwork, which I believe is made all the more effective for its usage of a real woman and being a photograph rather than a painting. Taken in the 1920s, when erotic nude photography would have still been quite the novelty and talking point, this scene using a life model and medical skeleton to capture moments of affection between the two figures. I love the contrast of youthful female flesh and bone, the look of genuine love and adoration that the female model bestows on her comically boney companion, the relationship imagined between these two unlikely bedfellows. It’s a strangely sweet and innocent romance that is portrayed between them. Another key reason that I keep coming back to these Death and the Maiden images and others in art is their ambiguity and the scope of interpretation. Is the woman kneeling at the skeleton’s feet pleading with him, or in loving adoration? Are those boney arms of death tightly wrapped around the nude maiden’s flesh done so in a passionate embrace of lust and longing, or aggressive entrapment? Who is leading who in the linking of life and death, and how willingly does the live partner accept the hand of death?

Most of Fiedler’s images present a playful yet none the less powerful relationship between the nude woman and her deathly companion ­her playmate, as the series’ title keenly indicates. Whilst recreating these images for our own artworks, we found that there was certainly a mixture of both powerful poignancy and moments of macabre beauty but also a lot of humour and laughter. The skeleton’s arm fell off at one point, ‘he’ slumped down in his seated position a little too much appearing drunk/lovestruck, his head swivelled around to face the wrong way. The comical nature of the scene came to the surface at these points, and fully showed us the technical challenges that Fiedler would have addressed and conquered so skillfully in his photographs. The challenges of making the skeleton model comply to appear as characterful and living as the human one became apparent in trying to recreate them. I appreciate Fiedler’s skill and illusion even more now, having attempted it ourselves. I hope that Fieldler and his model had as much fun and laughter in the studio as we did in the museum.

Art Macabre is no stranger to bringing nude very much alive models together with skeletal counterparts in the name of art. For the past five years, we’ve held regular events allowing anyone over 18 the opportunity to create their own 21st Century versions of Memento Mori. Inspired very much by the traditions of Dance of death and Death and the Maiden imagery and artwork, we bring our own contemporary eyes to create scenes that are surreal, macabre, dramatic and beautiful, to inspire those present to draw what they see and think a little about mortality.

When I started these events and pioneered ‘death drawing’ in 2010 I said that I would keep going with the deathly theme until we ran out of ideas. Well, five years on and I have seen that as many artists, poets, musicians, photographers and sculptors before us, the contrast and collaboration of flesh and bone, Death and the Maiden proves to be worthy of continued fascination and inspiration. We’ve not tired of it yet! We hope that Franz and his female model would have enjoyed seeing what they’ve continued to inspire.

The spirit of play and macabre mischief was certainly alive and well, amongst the specimens of the museum. Thanks to Barts Pathology Museum and Dead Meet for hosting Art Macabre and helping us to realise our desire to recreate these images. Carla Valentine, a regular Death and the Maiden with a particular interest in all things necromantic, and I have long talked about this event and to see it finally happen was a joy. Perhaps we should recreate the whole series, as well as other Death and the Maiden images such as that by Salvador Dali, in the near future. Volunteer nude maidens…step forward now?

This week in London Art Macabre will present more scenes featuring life and death as we take models outside to pose amongst gravestones at Tower Hamlets Cemetery Park: 26th July as part of Shuffle Festival. There’ll be live song and more opportunities to create your own deathly artwork. 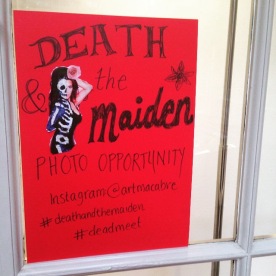