When the wonderful people at Art Macabre invited Death & the Maiden’s own Lucy Talbot to experience the first Drawn at the Tower, a series of events at the Tower of London after dark, how could she say no? Particularly when it would be the She Wolf of France walking into the beautiful low lit bed chamber. What an honour it was to sit within the walls of a room that had seen so many sights’ heard so many stories…held so many secrets… 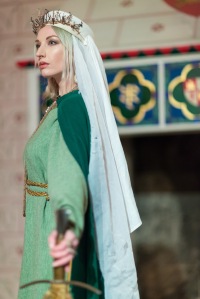 To enter the Tower of London after dark was a beautifully haunting experience. When I cast my mind back to the low lit bed chamber with rich red and gold fabrics, grand fire place and four poster bed I can still smell the sweet fragrance hanging in the air and hear Doll Parts floating through the room. With the faint sound of pencils gliding across paper drifting in and out of ear reach. The ghosts of England’s past monarchs felt close that night, as if at any point they could appear. When the beautiful Queen Isabella walked into her chamber the experience became truly magical. What an honour it was to sit within the walls of a room that had seen so many sights, heard so many stories…held so many secrets…

The playlist was an excellent mix of traditional medieval melodies and carefully selected contemporary tracks that Nikki felt reflected Queen Isabella’s rebellious spirit. These ranged from Riot grrrl classics to the softer sounds of Florence and the Machine. For me, these modern choices brought me closer to Isabella in some strange way. The lyrics to songs which had resonated so deeply with me over my lifetime felt relevant to her. A woman whose colourful life was not without struggle, turbulent romance and hardship (we’ve all been there – maybe not to the extreme of red hot pokers and embalmed hearts) seemed alive. The feisty ‘She Wolf of France’ was still present before us in all her strength and glory. Yet here we all were in her bed chamber experiencing a personal moment.

To aid our journey back through time we learnt about Strewing Herbs, the practice of scattering herbs, rushes and straw through out the home to release aromas and natural oils when crushed under foot. This technique was used across Europe from the Medieval to early Renaissance period. The wonderful Odette Toilette, a perfume history expert and author of Perfume: A Century of Scent provided small herb bags that were handed out before Isabella entered the chamber. Odette used Balm, Chamomile, Cowslip, Hops, Marjoram, Fennel, Tansy, Sage, Woodruff, Lavender and Hyssop for the strewing herbs to accurately bring to life this historical practice. The scent was an incredible mix of calming, warm sweet tones that created a truly unique sensory experience. I felt immersed in a magical, dream like moment, one where I could almost feel the herbs crushing under my own feet as I walked from room to room.

I was first ‘introduced’ to ‘The She Wolf’ on a London ghost walk in 2014. Robert Stephenson led us around the walls St. Pauls and across the road to Christ Church Greyfriars where I learned several queens, including Isabella were buried. Now a public garden, this beautiful site is a tranquil rest spot in the heart of London. The story goes these royal ladies have become very territorial over their resting place and through an unwillingness to share, fight each other at night. Since this I have enjoyed reading of Isabella’s eventful life. I am still amused each time I pass by, imagining these feisty female ghosts sparring by moonlight. There is a road close by called ‘Queen Isabella’s Passage’ which no doubt she proudly reminds her opponents mid brawl.

“Of all England’s medieval Queens few have captured the imagination quite like Isabella of France. Through the ages distinguished playwrights, Hollywood directors and a plethora of historical novelists have attempted to portray this fascinating and enigmatic Queen but their attempts have done little to add to our understanding of a woman who continues to polarise opinion. Depending on which side you take Isabella can be seen as ‘She Wolf’, the femme fatale of the English monarchy, or simply as a misunderstood woman, passionate, intelligent and driven to desperate measures by her cruel despotic husband” (Murphy, 2003).

As someone who should label any attempt at artwork “Lucy Talbot, aged 5”. I was slightly anxious when Nikki invited me along to the first Drawn at the Tower. That said, there was no way I wanted to miss out on such a special event. The evening was split into two sessions. I spent the first half with King Edward I (modelled by Theo) and the second with Queen Isabella (Manko). Edward had attempted to break up Isabella’s engagement to King Edward II, a marriage arranged to improve political relations between England and France. It was only when he died that the marriage went ahead in 1307. Isabella’s relationship with Edward II was undeniably complex and adulterous, he died in 1327 whilst imprisoned at Berkeley Castle following an “accident.” The circumstances of which are widely disputed by historians. Legend has it that his murder was arranged by Isabella and her lover Roger Mortimer.

Each session was led by an artist who brought both flair and technical ability. It was evident they had done their research bringing the personality and grandeur of their monarch to life. The whole experience was calm and atmospheric. Any inhibition at my lack of talent dissolved and became quite lost in my own drawing. When the session was complete all our work was laid out and I was amazed at the talent that surrounded me.

Art Macabre Director Nikki Shaill feels “the Tower has a special kind of magic after dark once the tourists have gone and it’s left for the local Londoners’ to explore it’s secrets through sketching” and is excited to explore the Tower of London and it’s history through drawing. “I’ve discovered some surprising and fascinating facts that I can’t wait to share! We’re looking forward to our upcoming guest artists, and our ravens drawing special should be particularly special!”

Each event will feature a different guest artist including Death and the Maiden’s fabulous friend and logo designer Lozzy Bones. Don’t miss out on this unique opportunity to explore The Tower of London after dark and spend some time with the ghosts of it’s past.

Drawn at the Tower with Art Macabre

Unlock your drawing potential at this unique after hours drawing series at the Tower of London. This creative collaboration between Historic Royal Palaces and Art Macabre invites adults of all abilities to use drawing to explore stories from the Tower’s remarkable 1,000 year history. Sketch royals, rogues and ravens while you explore the stories and eerie atmosphere of the tower at night through these unforgettable immersive drawing experiences.

You can buy tickets here

All events are located at The Tower of London

Drawn at the Tower with Art Macabre – Tower of Love: Romance is Dead

A post-Valentines sketching special, dedicated to those who died at the Tower in the name of love. Enter the drama and tragedy of the Tudor court, and explore Henry VIII’s doomed love affair with Anne Boleyn. Sketch our costumed models, posing as their ghosts at the site of her burial in the Chapel of St Peter ad Vincula. There will also be an opportunity to create minature love tokens with guest artist Lozzy Bones, in the Chapel’s crypt.

Drawn at the Tower with Art Macabre – Witchcraft and Dark Arts

Last year, a team of archaeologists’ unearthed new evidence of protection against witchcraft and demonology carved and buried within the Tower’s walls. Discover the dark secrets of these ‘apotropaic marks’ and the compelling power of symbols at this after-hours theatrical drawing event. Sketch your own designs inspired by the history of witchcraft, sorcery and demonology at the Tower – under the watchful eye of guest artist Jason Atomic.

Drawn at the Tower with Art Macabre – Ravens and Morbid Corvids

Legend has it that if the ravens should ever leave the fortress walls, the Tower and the kingdom will fall. In this unique event we’ll explore mythology, folklore and true tales of the Tower’s famous feathered guardians. Draw these magnificent birds up close as they pose alongside the Tower’s very own Raven Master. Plus capture a dancer-model posing in costume as a corvid.

Drawn at the Tower with Art Macabre – Royal Beasts

The Tower was once the historic home to a magnificent menagerie of beasts: from Barbary lions and the first elephants in England, to mischievous monkeys and a polar bear who swam in the river Thames. Explore through drawing the stories of London’s first zoo. More information to come!