Patricia Lundy explores the relationship between death & the feminine regularly on her beautiful blog Somthng Eldritch. Through exploration of literature and Victorian history Patricia delves into the mourning rituals of a bygone era. In this post sexual suggestion and the male gaze is contemplated by visiting the works of two amazing authors. Kate Mayfield of  The Undertaker’s Daugher & Chris Woodyard of The Victorian Book of the Dead. Edgar Allan Poe believed the most beautiful woman was a dead woman. Does this belief lend itself to the delicately fashioned burial shroud? 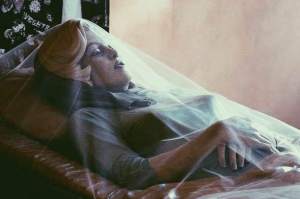 Patricia is an aspiring speculative fiction writer. Currently, she’s working toward her Science Fiction and Fantasy Writers of America membership. Her blog Somethng Eldritch serves to indulge her loves of reading, writing, and morbidity.

shroud
noun
1. a length of cloth or an enveloping garment in which a dead person is wrapped for burial

While men were often buried in suits or “burial robes,” women in the Victorian Era were buried in shrouds, often one they had sewn themselves. It was common for a woman to make her own shroud “as part of [her] wedding trousseaux” due to “the high rates of death in child birth,” an event that could shortly follow her wedding day (Woodyard 126). Women even formed societies, akin to sewing or knitting clubs, where they would gather together to sew shrouds, sometimes as an act of charity.

For those ladies who did not inherit dexterous sewing hands (I would have been included in this lot) there was also the option of factory-made burial shrouds, or purchasing a shroud from an undertaker, who usually hired a seamstress or dressmaker to make his shrouds, at the time of burial.

In her memoir The Undertaker’s Daughter, Kate Mayfield recalls The Shroud Lady, whom her father, the undertaker, hired to make shrouds for his female customers. The Shroud Lady “sat down at her Singer and imagined what she thought a negligee-type burial dress should look like” and “strove to find the right balance between a dress and a nightgown” (Mayfield 83). Her shrouds were decidedly feminine, delicate, and dreamily sherbet-colored, yet needed to balance these qualities by covering “as much skin as possible” (83).

noun
1. a woman’s light dressing gown, typically made of a filmy, soft fabric.

Like negligees, shrouds were beautiful and intimate pieces of clothing, often left open in the back for easier dressing of the dead body. Yet was there something latently sexual about them, due to their nature of resembling lingerie?

In articles depicting female burial clothing in the Victorian Era, notes Chris Woodyard, there is indeed “a strange element of sexuality ” (128). This is not surprising, as many elements of the dead female body have been sexualized throughout history, as evidenced from the wax “Anatomical Venus,” with pearls stringing her neck and bowels erupting out of her stomach.

Poe believed the most beautiful woman was a dead woman; a pastel colored shroud, invoking the delicate sensuality associated with lingerie, certainly enhanced the feelings behind this perspective. Yet the shroud also made a woman vulnerable. For she was just a corpse in death, her agency gone, with only the thin layer of a shroud to protect her from the male gaze.

Someone ought to sew a shroud – a shroud, at least – for the opened and exposed Anatomical Venus.