This week is all about The Big Conversation as it’s Dying Matters Awareness Week (9th – 15th of May). We learn from the Mary Poppins of Death herself, Louise Winter, that talking about death can be as easy as tea & cake. From Brooklyn to The Isle of Wight. The more we engage with death as a part of life, and life as part of death, the better our lives, and ultimately our deaths will be. 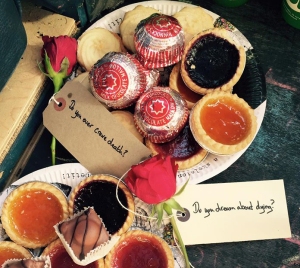 Louise Winter is a funeral planner and celebrant and the founder of Poetic Endings.  In another life, she brought her unique creativity and storytelling to the world of brands.  She now creates relevant and meaningful funerals for the benefit of loved ones left behind.

Known as the ‘Mary Poppins of Death’, she regularly hosts Death Cafes as well as other events encouraging conversation about death, dying, life and living.

She loves life, death and everything in between.

“No one wants to talk about death sweetheart,” a funeral director once told me, as he put his hand on my shoulder and shook his head.

The next day, nearly 100 people came to a Death Café I was hosting in London.  Every nook and cranny of Ziferblat in Shoreditch was filled with people who were dying to talk about death.

“Perhaps you’d prefer to enjoy a pint at the pub?” I asked the queue of people waiting outside.  “No way, we’re here to talk about death,” they protested.  So we filled up every inch of floor space, letting people sit on the wooden floor and squash into a broom cupboard to get their fill of tea, cake and death.

Death has been owned for far too long by Doom, Gloom & Sons – my affectionate name for the traditional funeral directors of the British High Street.  Their version of death is hidden behind a dusty window display with a photo of austere Victorian gentlemen, a vase of plastic flowers and a memorial headstone.  If this is death, no wonder the public is so reluctant to engage with it, until a loved one dies and they absolutely have to do so.

I work as a modern funeral planner and celebrant, helping families to create personalised, meaningful and relevant funerals for their loved ones, as well as hosting events which encourage people to engage with death, dying, life and living before it’s too late.  All the work I do positions death as part of life.  I take death out of funeral homes, hospital wards, hospices and church halls and bring it to places where it’s unexpected, beautiful and thought provoking.

The very first death event I hosted was a Death Cafe at the Morbid Anatomy Museum in Brooklyn.  I had no idea what would happen.  Would anyone come?  Would the busy people of Brooklyn give up their evening to talk about death with a strange British girl? I wasn’t even tempting them with wine; only coffee and cookies were on offer.  If anyone did turn up, what would they talk about?  I expected to spend the evening alone, awkwardly twiddling my thumbs and eating unwanted cookies.

It turned out that Brooklyn loved talking about death.  My very first Death Café ended with a group of strangers, sharing openly about how they’d like to live, and ultimately, how they’d like to die and asking when the next event would be.

It was in Brooklyn that I became known as the Mary Poppins of Death, serving up all matters of mortality with a spoonful of sugar in the form of cake and comfort, but no magic flying umbrella.

Back in England, I’ve hosted death events at festivals, in public institutions, in front rooms, at co-working spaces, in cemeteries and even on a farm in rural Essex.

“Do people really want to talk about death at a festival?” Rob da Bank asked when I proposed the idea of a Death Café at his music festival, Bestival, on the Isle of Wight.  “I can’t think of anywhere better,” I replied.  Somewhat reluctantly, he gave me a restored Bollywood bus in an area known as The Commune.  Missy Elliot was headlining (the festival, not the Death Café).

Co-ordinating a Death Café at a festival when you’re (a) staying in a tent and (b) staying up all night is not easy.  I persuaded a friend of mine to sweet talk the ladies of the WI (who serve the hungover masses with tea and cake) into selling us some paper cups and fresh milk, as I’d managed to lose both in the mud.  So many hungover people took a couple of hours out of partying to talk about death with strangers.  Mr Kipling’s French Fancies and lukewarm tea helped the hangovers, and everyone left with a renewed sense of being alive.

Bestival was a world away from Shoreditch House’s first Death Café.  The cake was homemade and delicious, and the tea was hot.  The glitzy and the glamorous people of London’s media world talked death with a mix of funeral directors, grief counsellors and the editor of a prolific sex magazine.  Sex and death became good friends that night.

A Death Café as part of London’s Month of the Dead saw Abney Park Cemetery full of people who wanted to talk about death amidst the gravestones.  Unexpectedly, two children (aptly named Summer and Winter) came along to join the conversation.  They were more open to talking about death than most of the adults.  “Why is everyone being so awkward about it?” asked Summer, aged six.

A private Death Café in my friend’s front room in Lewisham with a respiratory doctor, an A&E Consultant, a life and death coach, a final farewell planner and an end-of-life-doula lasted for hours and hours. We were in our element, professionals from different death related disciplines animatedly talking shop.

For most people, a Death Café is a little like a minor crash. It happens, it’s a big deal then you drive away and return to normal life, forgetting all about it.  What I’ve found to be most effective is a series of mini collisions in the form of continuous engagements with death over a period of time, which keep my life and the way I’m living it in perspective.

Alongside my co-host and social change innovator David Blackwell, I’ve been testing out alternative ways of engaging the public with death, encouraging the series of mini collisions, which keep life so alive.

In March, we hosted a gathering in the summerhouse of a community garden in North London, A Feast of Life, a Taste of Death. We’ve been testing out a series of events designed to get people engaging with death without even realising it.  The first one was based on food as we figured that people might not like death, but they do like eating with friends.  So we encouraged them to think of it as an evening of food and friends with death making a subtle but unforgettable appearance.

Everyone was encouraged to bring along a dish that reminded them of being alive, and the story behind it.  There was an abundance of food – roasted tomato soup, Caribbean takeaway, jacket potatoes with beans, cheese and coleslaw, ackee & saltfish patties, Vietnamese pho, chocolate and prune brownies, jam sandwiches, pizza, pickled eggs, frittata, macaroni cheese, sourdough bread, Valencian oranges, Swedish pancakes, honey and chilli roasted sweet potatoes and so much more!

The feast was served on top of a cardboard coffin, which Ecoffins very kindly provided, onto which the attendees wrote the feelings that came up from the food they’d brought along.

The guests feasted on life, talked about death, connected with old friends and made a few new ones too. In the words of one guest: “I’m feeling absolutely brilliant today after a lovely night with great people and food and openness.”

Seven tips for hosting your own engaging death event

There’s plenty more death and dying in my diary for the rest of 2016.  The month of May brings a Death Café for Dying Matters #TheBigConversation, co-hosted by Dr Laura-Jane Smith, end-of-life-doula Anna Lyons, David Blackwell and yours truly. Come along to a crumbling chapel in South London, to talk about death surrounded by wildflowers, candles and willow coffins.  Children are very welcome to attend, and there’ll be activities to help them engage with death creatively.

If you missed out on tickets, there’ll be another Death Café at the Menier Gallery as part of Creativity & Wellbeing Week in June.

I’ll also be providing some funeral related laughs at It’s Your Funeral on Monday 16th May.  It will be a send up of a truly British send off with a wake’s worth of sausage rolls to give away as prizes.  I’ll be sharing a mix of heartbreak, heartache and heartwarming stories from the funeral frontline.  Come along to discover the well-kept secrets that keep the UK funeral industry alive, and pick up a few ideas for your own enlightened and inspired funeral along the way.

The more we engage with death as part of life, and life as part of death, the better our lives, and ultimately our deaths will be.  My mission is to take death out of the dusty, fake flower filled darkness of funeral homes, and into the light of life.