For Erica Buist, The Deathtivals Project didn’t come directly out of grief. It came out of her reaction to it. From snooping in a dead man’s fridge to computer investigations, Erica found herself on a journey of extreme anxiety and agoraphobia following the loss of someone it seemed she wasn’t entitled to grieve. This project moves fast from throwing a sandwich in the local supermarket to travelling the world. A sudden twist that mirrors so many journeys through the complexities of grief. 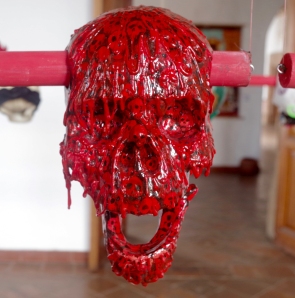 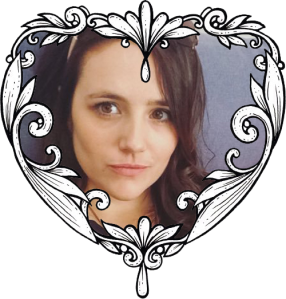 Erica is a writer, photographer and journalist, mostly for the Guardian. She is writing a book called The Deathtivals in which she travels the world attending death festivals. She is a Londoner based in Paris, and is currently learning her fourth language.

The Deathtivals Project started with me snooping in a dead man’s fridge. Even as I was doing it I knew it didn’t count as a post mortem, but my fiance’s father was still upstairs in his bed and I had to know. I looked at the shelves stacked with bacon, cheese, sausages and chocolate, and diagnosed him with heart disease. The fact that the coroner agreed with me didn’t make me look like much of a genius. Considering he seemed in no way sick, never dealt with his wife’s death, was a doctor who never went to the doctor, and half the world’s humans die from heart disease, the ticker was a pretty safe bet.

I didn’t stop there. I had to do a time-of-death investigation too. As I buzzed around trying to answer all the questions that clear-headed professionals would answer later that day, my then-fiance Dion mopped up dog mess in the kitchen. His dad’s doberman, Troy, had been trapped in there since Chris died. But how long had that been? I went to Chris’s computer. Knowledge of his unflinching routine would produce more accurate results than any coroner, I decided. Knowing he checked his emails at the same time every day, I logged in and saw from the last emails he sent and opened that he had been dead for eight days.

I knew he was dead an hour before Dion found him. He sent me a text after getting a call from his dad’s cleaner, “Bobbi’s at dad’s and he’s not answering the door or phone. Milk and paper haven’t been collected and the dog is barking. He’s probably just asleep or out, right?” I didn’t need anything else. Suspicion that something’s wrong, confirmation that something’s wrong, denial that anything’s wrong? That text was as good as a death certificate.

Dion arrived at the house at 9:30am. He opened the door and called, “Dad!” No answer. Troy barked like crazy when he heard his voice. Dion opened the kitchen door and saw the mess, and ribs he’d never seen before on the overfed dog. He fed him twice, already knowing what he’d find upstairs. He opened his dad’s bedroom door and saw him in bed, with his reading glasses on his head and a book on his chest. In a moment of trauma-induced babbling he would later describe to me what a corpse looks like after eight days. Words like “bloated” and “zombie” tumbled out of him, all while we cowered in the kitchen so I wouldn’t have to see what we could all smell: the body being brought downstairs to be put in an unmarked van, and driven away.

The Deathtivals Project didn’t come directly out of grief. It came out of my reaction to it. The sense that I wasn’t entitled to grieve for someone who wasn’t a direct family member, a feeling that was reinforced with every “How is Dion?” No one asked how I was. I didn’t begrudge them assuming I hadn’t really lost anyone. They didn’t know I’d lived with him for two years, or that he bragged like a dad to his friends about my getting a job at the Guardian, or that we found an entire case of my favourite type of wine in the cellar – a kind he didn’t even drink. We all revert back to traditional ideas of family when it comes to grief. I get that. So I told them Dion was coping heroically. Then I would find my way home to my sofa where I would twist myself into the tiniest knot, hug myself and tremble until Dion got home.

The Guardian then gave me a freelance contract whereby I would work from home, which was excellent because there’s nothing better for a fledgling agoraphobe than a work-at-home job. I even started arguing my case, “Why is everyone so big on going outside EVERY DAY anyway? Seriously, who is Outside’s PR team? Are there Outside lobbyists? Come on, I have a window! You can get Vitamin D from leeks and I have FOUR!” You actually can’t get Vitamin D from leeks as it turns out (facts aren’t exactly your friend when trying to convince people that agoraphobia is the way forward) and the reason there were so many leeks in the fridge is Dion was keeping it stocked, knowing that if there was no food in the house I’d rather stay inside than eat.

Eventually, I admitted it probably is preferable to be able to go outside, so I tried to cure my agoraphobia by going to the supermarket to buy a sandwich. To those of you who have never had agoraphobia, I’ll describe it to you: have you ever had to wade through a crowd of screaming, belligerent drunk people? That’s what the air felt like. It touched my face in an incredibly oppressive way and seemed to thicken in my lungs. I cringed in terror from anyone who passed me in the street, even though it was mainly yummy mummies en route to and from Zumba. When I got to the supermarket, I couldn’t face trying to pick up one of those sandwiches in triangular packaging, the corners just seemed like a NIGHTMARE, so I grabbed a baguette sandwich just for the ease of grip. Then someone approached me. She was, in real life, just a nice lady trying to offer me a discount on cookies, but I treated her as if she was a toothless demon with open sores growling “GIVE ME A KISS!” I said, and I believe these were my exact words, “N…n…no!” and I threw the sandwich down and ran home.

When I got home, where the air was gentle and thin enough to breathe without effort, I thought to myself, “This is not a normal part of the grieving process. I’m pretty sure it’s not denial, anger, fear, sandwich-throwing, acceptance.”

I do not believe Britain, or the West in general, is a very good place to be when trying to overcome a trauma involving death. We’re too afraid of it. We avoid direct mention of it; we have no mourning period, we’re just expected to go back to work; and when death cafes started popping up (people meeting to talk about death) that made the news. People speaking openly about death makes HEADLINES here.

I cast my mind back to the few years when I lived in Mexico, where they have an annual festival for the dead. I started researching other countries where they have death festivals, or “deathtivals” as I now call them. I found out that there are parts of the process of finding someone dead that I would never have assumed were cultural that are, such as priority number one; priority NUMBER ONE when you find someone dead is “get rid of the body”. Then I read that in Ifugao, a landlocked region of Indonesia, when someone dies the body isn’t removed straight away. Instead, the body is propped on a chair at the front of their house and left for up to eight days before interment. Death rituals are performed and people drink, crack jokes and party as the body decomposes in the stifling heat and humidity. I’m not saying we should import this ritual, but it’s interesting to note that the horror of a decomposing body isn’t necessarily instinctive.

This little research expedition that I performed, still shaking from my sandwich-throwing panic attack, led to what I’m pretty sure is the opposite of agoraphobia: The Deathtivals Project. I am writing a book in which I travel the world attending deathtivals. Eight of them. One for every day we didn’t find Chris. (And yes, I know already that some people will see a woman travelling for answers and label it “Eat, Pray, Love with corpses”, but whatever…)

I realise am a strange person to be writing a book about death. I’m not old or terminally ill and as the daughter-in-law of the person who kicked this off by dropping dead so unexpectedly, I am an outsider, and I have been told I have no right to even feel this loss.

But this book is not a run-down of “brown people do the darndest things”. I am genuinely searching elsewhere for where we’re getting it wrong, because we are. Life-extension and “immortalist” groups are made up overwhelmingly of older western white men – it seems that it’s only here in the middle-class West that death is seen as a disease to be cured. People told me that stalking friends on social media to check they hadn’t died in the night was “normal”, that answering every phone call with “Thank god” was “understandable” and that obsessing over quantities of sugar and fat because I was afraid Dion’s heart would also give out was something to immediately change the subject about because let’s not think about death, it’s scary.

So, I’m on my way around the world, hoping to understand why facing death makes some throw a party and others throw a sandwich.