Lauren LeRoy is a funeral director from New York State. Entering mortuary school at nineteen, she had no idea what she was in for. Lauren reflects on her experiences in a male dominated industry and on why her job is so important. This beautiful dedication to her Grandfather’s memory takes us back to a snowy day in November and into the precious memories that keep alive those that influenced us the most.

Little Miss Funeral is actually Lauren LeRoy, a twenty six year old licensed funeral director in New York State. Little Miss Funeral was started in March 2012 as a platform for Lauren to share her thoughts and ideas on the funeral industry. She has written for and been featured with numerous funeral publications including funeralOne and ASD. Most recently, for the BBC.

My mother raised me to believe that I could be anything that I wanted to be. My father happened to have an uncle who owned a funeral home. When my grandfather died when I was twelve, it just seemed like something that I could do; you know, funerals. I’m not sure if I ever truly believed in callings, but I suppose that this is what it is. For as long as I can remember, when asked what I wanted to be when I grew up, funeral director was the word that would roll off of my tongue. Never really knowing the actual hard work, long hours, unpredictability and sadness that came along with the title. Didn’t matter. I wanted it.

Even as I entered mortuary school at nineteen, I had no idea what I was in for. Fancy cars, nice suits, a warm smile. These were things that I came to associate with the profession. I don’t think I could have actually dreamed of what my life would be like. Working sixty or more hours a week. Seeing what the human body looked like opened up and vacant of all organs. Sitting with a mother in front of me whose child has just taken their own life. These moments are what became my reality. And then, I started to question myself. What was it, really, that drew me into the death care industry? Why in the world did I put myself out there day after day, to carry the burden of the families that I served? Why did I choose a job that was so hard?

The more I questioned everything, the more clear it became to me; because death is important.

The funeral industry has been a very male dominated field within the Western Culture for many decades, however, as time goes on we see more and more women entering the field. At twenty ­six, I was brought up in a vastly different world from my parents and grandparents before me. So one day when I told my mother that I wanted to be a funeral director, she didn’t laugh or mock me. Instead, she encouraged me to chase my dreams. More so, she made me believe that I would make a great funeral director. A good listener. A soft speaker. Someone who could guide others through a difficult time without seeming pushy or intimidating. Someone who wanted to make a difference in other’s lives.

It’s not always easy, though.

Many days I great people at the door of the funeral home only to be asked where the funeral director is. I suppose after decades of expecting an older gentleman in a suit, a young female in a dress can be quite a surprise. People are unsure of me. I can’t possibly have much knowledge when I look so young, after all. But as we sit together and dig deep into the lives of their loved ones, these families come to appreciate the unique presence that I bring. They can feel in their bones that I truly want to help them make this terrible time a little easier. I want to help them honor this people that they lost because their life was important. Our lives mean something.

When this job seems particularly difficult, I often think back to that snowy day in November when we laid my grandfather to rest. The one that started it all. I held my purple stuffed animal monkey very tightly as I walked into the funeral home. The monkey that held a little red pillow that had the words “I love you” stitched in cursive. I gave it to my father to place in the casket as a reminder to my grandpa, that no matter what, I loved him. He looked like himself in his suit, with the American flag embroidered in the back panel of his casket. He was a proud World War II veteran. A recipient of a purple heart. My dad tells me he was shot right below his eye, but I never noticed a scar. I do remember all the times I sat with my grandpa on his porch, though. I remember how he looked as he played cards at his kitchen table and how his eyes would smile when my brother and I would come and visit him. And I remember that stupid blue sweater that he would always wear, no matter what the weather was like outside. The one that smelled of cigarette smoke and had more holes in it than a piece of Swiss cheese. My grandpa was my man. He was good, strong and kind. He mattered.

The funeral director, who I believed had been the one to embalm my grandfather passed away unexpectedly in 2012. I was so new to the profession at the time and had only seen him in passing a few times. I always wanted to ask him, if he remembered working on my grandfather. It was such a gift to be able to see him looking like himself after his illness and seeing him in a nursing home. I would have liked to know for certain, if he had cared for his body. I would have liked to thank him for caring for him like he was a member of his own family. Our bodies may only be shells when we die, but they still deserve respect.

That’s why death is so important.

That’s why I care.

That’s why I’m a funeral director. 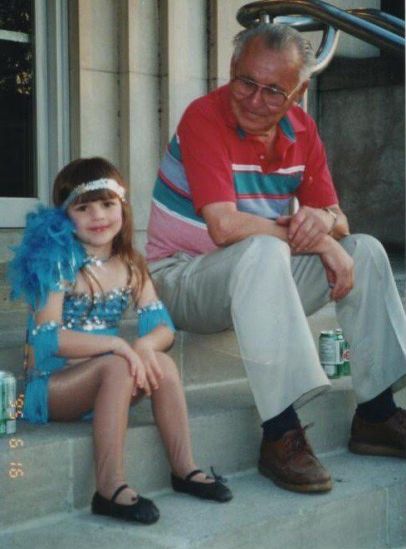