It is no secret that Donald Trump has used death as a scare tactic throughout his campaign, and has continued to do so during his first month in office. The constant reminder that his executive orders are “saving lives” has blanketed us in what is now a persistent, irrational fear of dying. Humans, as a cognitively advanced species, have always feared death. But Donald Trump has heightened this fear to a new degree through reiterations that “aggressive” countries are “out to get us”. In subtext, whispers and disgruntled tantrums he incessantly implies that venturing into the inner cities, into the “carnage” of Chicago, is a life threatening endeavor; only he can save us from a gory demise. Why did this tactic work so well? Because people were already afraid of dying.

Donald Trump used a pre-existing foundational fear to build his empire upon. Although it is not on the top of the phobia list, last year 68% of Americans admitted to suffering from necrophobia, or the fear of death (Kulic 2016). This fear, exacerbated by Trump’s M.O. of using death as a motivator, has spurred prejudice like Islamophobia and the resurgence of the neo-nazi community. Numerous other hate groups have come out of the woodwork in the past year and are planting their flags in the ground. It has been argued that the Obama presidency saw a revival of racist attitudes, but Trump has brought this to a head. What fed this revival? America’s fear of the reaper.

But this is not the only way that Trump has used and abused death in his campaign. He recently made claims, behind the podium as well as via twitter, that 3–5 million people in America voted against him illegally. With no evidence to back this claim, who better to blame than those with no voice: undocumented immigrants and the dead. Trump had not used the deceased as a scapegoat for voter fraud so aggressively until his January 25th interview with ABC’s David Muir. But this is not the first time that the dead have been used as election pawns in America. In fact, there is a colorful history of the dead somehow making the line to cast their ballots. 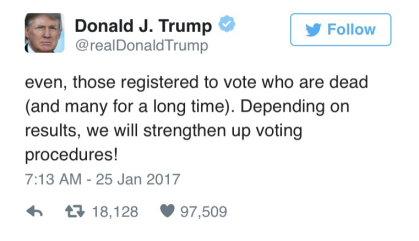 In the 19th century, the election of Rutherford B. Hayes may have seen a lot of dead voters at the polls. After his loss, Rutherford’s opponent Samuel J. Tilden slung accusations that Rutherford’s supporters were guilty of voter fraud. Dead voters were suddenly posing a threat, and Congress decided to nip the issue in the bud by establishing the First Enforcement Act, meant to back the 15th Amendment. The act stated that it was a criminal offense to “knowingly personate and vote, or attempt to vote in the name of any other person, whether living, dead, or fictitious.”

Despite this act, the dead haven’t seemed to stop rocking the vote.

Investigations were recently launched in both New Hampshire and Vermont; it seems that the dead were voting there too. The investigation into New Hampshire’s voter fraud uncovered election workers “offering the ballots of deceased New Hamphshirans . . . at poll after poll” said Project Veritas in an article entitled Dead People Receive Ballots. The same language in the First Enforcement Act was used in the 1984 voter fraud case, Blitz vs The United States, and in 2012 South Carolina saw 900 deceased on their ballots.

It is wildly amusing to imagine a line of the undead waiting to put their two cents into a local election. Contrary to what many World War Z buffs may want to believe, this is not how the dead end up on the ballots. More often than not, dead voters remain on voter lists because polls are not updated as frequently or as efficiently as they should be. Americans register to vote, meet a timely (or untimely) demise, and then remain on voter lists indefinitely. This seems to be the most plausible explanation for Donald Trump’s alleged dead voters, and there is proof of this. According to a Pew Center study done in 2012, a study believed to be collecting dust in the Oval Office, unread by Donald Trump, there is no existing evidence of dead voters actually casting ballots, only the recently deceased who haven’t been removed from the system. 1.8 million of them to be exact. 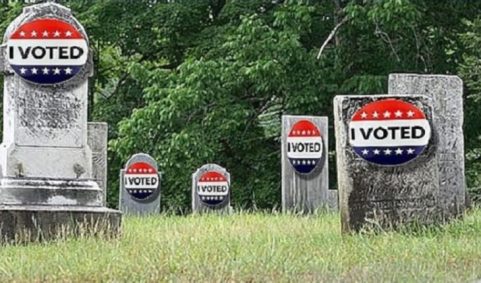 Yet right wing politicians still seem to be running, swiftly, with the “zombie voters” theory. Last year top Trump adviser Rudy Giuliani touted the idea that dead people generally vote for Democrats, and that “Democrats could steal a close election by having dead people vote in inner cities.” On the same plane, Judge Jeanine Piro, a Republican TV commentator and former prosecutor, said with much blasé that the dead vote all the time. Committing voter fraud in the name of a long deceased citizen and the controversial conversations that follow strip the dead of their agency in death. The lack of attention given to maintaining poll lists enlists the dead to continue to partcipate in places and events they have long left behind. It is a common belief that the deceased do not play a part in the theatrics taking place above ground: they cannot speak for themselves, make decisions or influence the communities around them. This is quite untrue; the dead do affect us in many ways. From the way graveyards and sacred burial sites influence the construction of their surrounding areas, the rise of dark tourism and the ghost story in architectural spaces and places, the dead are still very much alive. And although it may not align with the political beliefs they had in life, the forced participation of the dead in the rigging of an election is proof that they still dabble in societal roles. In fact, they play enough of a role to potentially swing smaller elections, though there is no proof that the number of dead voters have a large enough impact to swing the outcome of something as “tremendous” as the presidential election of 2016. That seems unlikely, in a big league sort of way.

Sure Mr. Trump, if you say so. But if the dead are voting, and you seem to believe they are, I’m glad you understand that they most definitely didn’t vote for you.

One thought on ““Zombie” Votes (or, Voter Fraud and The Agency of the Dead)”