Almost Heaven is a beautifully crafted exploration of life death and love, described as a “vibrant, human story” by The Hollywood Reporter, it follows 17 year old Ying Ling, who is training to become a mortician in one of China’s largest funeral homes. The film premiered at Berlin International Film Festival nominated for Best Documentary and was one of the Little White Lies top 10 films at the Sheffield Doc/Fest.

Death and the Maiden’s own Lucy Coleman Talbot will be doing a Q&A with director Carol Salter at the Picturehouse Central following this Saturday’s screening (full details below).

Lucy: What inspired you to make Almost Heaven?

Carol: Fear of death, losing a loved one and seeing a dead body motivated me to make this film. I read about Chinese teenagers performing spa and beauty treatments on the dead- their job was to give respect to the deceased by cleansing and washing away their ills and pains. I was fascinated by how young people could cope with working in a place of death. At that same age, the concept of death was so remote to me.

Lucy: You mention personal grief and seeing a dead body, I’ve often found these experiences channelled into creative outlets become a way of navigating through the journey of grief. Did the film impact on your personal life? If so how?

Carol: My parents actually passed away during the making of Almost Heaven.  The process of making the film and seeing the young morticians prepare the bodies helped me in a number of ways. I felt more equipped to make decisions on the preparation of my parent’s bodies. When organising their funerals we chose no body intervention and no embalming, just a simple linen cloth to wrap around them. I have gained a greater understanding and insight into how to treat our loved ones after they die through this experience.

Lucy: What felt familiar/ what felt alien when experiencing work at this funeral home?

Carol: The rituals, for example speaking to the deceased and bowing to them as a way of showing respect were new to me. There are many superstitions too, like not letting tears fall into the coffin so that the spirits do not become trapped. In my experience, preparing a dead body for a funeral would usually take place behind closed doors, but in China the extended family are able to watch the process from beginning to end. There was something so universal in the emotion and grief that was displayed and the need to give respect to the departed.

Lucy: Did you find it easy to access a funeral home when you first got to China? Or did your interest in death create suspicion or concern?

Carol: In China there is much stigma around death, many believing it’s bad luck to even mention the word. People who work in the funeral business were initially suspicious of my intentions. I gently and slowly found a way to enter this world by building trust. I also think that my approach to film making by filming on my own with a small camera helped.

“There are many superstitions too, like not letting tears fall into the coffin so that the spirits do not become trapped” 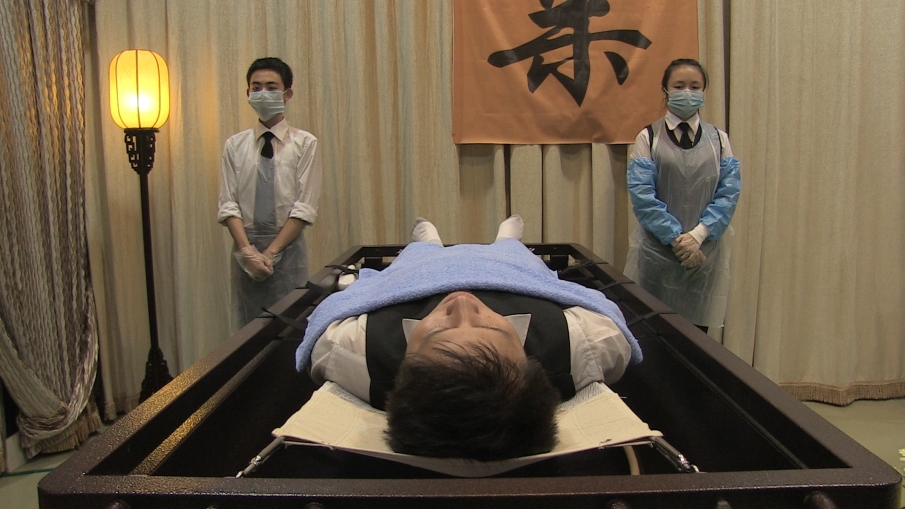 Lucy: Did you get the opportunity to speak/follow others at the funeral home and if so was it easy to immerse yourselves whilst filming? Some of the scenes are very intimate and it never feels for a moment that a camera is in the room. Did you identify with Ying Ling’s experiences?

Carol: I met with a number of young morticians while filming, but there was something about Ying Ling that drew me to her. She was innocent, quirky and as fearful of being a part of this environment as I was. I felt we were both on a journey to confront our own demons and fears. She seemed comforted with the camera and was always herself – sometimes she drifted into her own world.

Lucy: Some of my favourite moments in the film are Ying Ling doing every day things, how important was this juxtaposition to you as a director?

Carol: Death and life are inseparable. Because of this it was very important to capture the ordinary moments between the young morticians that make our lives meaningful as much as it was showing their work at the funeral home.

Lucy: What did you bring home from this experience?

Carol: I feel more equipped to talk about this aspect of life which we normally avoid – and perhaps less fearful at seeing a dead person. I feel more prepared when dealing with the practicalities of organising a funeral and the after care of a loved one. However, the loss and bereavement of someone is still a challenging journey that you can not always prepare for.

Lucy: Lastly, tell us why people should watch Almost Heaven?

Carol: For both Chinese and non-Chinese audiences this film is an unusual window into the workings of a funeral home. It can be for an audience with no immediate experience of dealing with death and also to those who have experienced losing someone a life affirming experience.

Almost Heaven will be showing on Saturday the 23rd of September 2017 at the 17:55 Picturehouse Central showing. Book a ticket here and join Lucy and Carol for the Q&A afterwards in the bar.

Screenings are taking place all over the world.