“Be home when the street lights come on!” Was a common directive during many of our childhoods, as we anxiously ran out into the world to play. However, in my neighborhood and for many of us who lived out our childhoods on the East Side of Los Angeles that directive also came with a sinister warning – “Or, she’ll get you.”

“Be home when the street lights come on!” Was a common directive during many of our childhoods, as we anxiously ran out into the world to play. However, in my neighborhood and for many of us who lived out our childhoods on the East Side of Los Angeles, that directive also came with a sinister warning – “Or, she’ll get you.”

Six-year-old me would warily begin to eye the diminishing light and sneak glances at the streetlights between neighborhood games of tag. When the lights finally turned on I was racing up the stairs and into the house at full speed. Sometimes, I would dare to look back half-hoping, half-dreading to see her – a woman all in white with her long, dark hair wild and blowing out behind her. She would be clutching a claw hammer and you would hear her coming for you, screeching like an owl and looking for children…to kill.

They say a local woman in the 1920s or 1930s had lost her shit and killed her children with a hammer. As these stories so often go, the woman escaped and is still roaming the hills seeking her next pint-sized victim.

Such cautionary tales are common around the world, especially among Mexican-American families like my own – fear is a useful parenting tool. 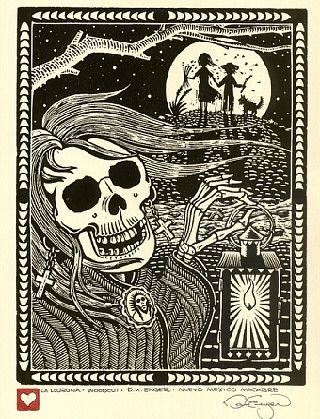 Kids won’t go to bed? Just tell them if they don’t go to sleep right now, La Mano Peluda a grotesque, partially decomposed, hairy hand some poor guy lost during the Spanish Inquisition, is going to drag them from their beds while they sleep!

Don’t want your kids playing near the water? We have a story for that, too – La Llorona. Believed to be a centuries old tale of a woman who commits infanticide by drowning her children in an act of vengeance after she discovers her husband is cheating on her. La Llorona now wanders, crying for her little ones and taking any living children she finds back with her to their watery grave.

Your child will get in her car seat so fast when she hears that the alternative is being forced to ride in La Carreta Chillona, or “The Screechy Wagon.” La Carreta Chillona is fashioned from the bones of victims who were once patients of a greedy, Spanish priest who deceived his patients into believing he was a doctor in order to get their money.

Then, there is the all-purpose terror, El Coco or Cucuy, who is the Mexican version of the universally dreaded Boogeyman. What he does or what he looks like varies from region to region, but everyone can agree when he finds you he will devour you.

As we grew up, we recognized the stories as the cautionary tales they were but, sometimes there is a terrible, tragic truth behind our elder’s stories.

Clara “Tiger Girl” Phillips was a former L.A. chorus girl who was wed to Armour Phillips. According to her friend Peggy Caffee, Armour had been fooling around with recently widowed cutie, Alberta Meadows. 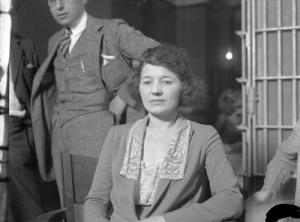 Clara immediately set her plans in motion and stopped in to a five-and-dime store to purchase a hammer. Before making her purchase she asked a store employee if he thought the hammer would be heavy enough to kill a woman with. Assuming she was making a joke he told Clara, “If you hit her hard enough with it.”

On July 10, 1922, Clara, with Peggy in tow, convinced Alberta to give them a ride. At some point during the drive Clara asked Alberta to pull over so that they might converse privately and proceeded to brutally beat her with a claw hammer and then rolled a large boulder on top of her as Peggy watched from the car. With her rival now out of the way, Clara returned home to her husband, where she informed him that she would make him the best dinner he’d ever had.

Armour told the police everything and Clara was tried and convicted of second-degree murder. Not long into her incarceration Clara escaped the county jail and was discovered four months later in Honduras. She was paroled in 1935.

Our folklore, ghost stories, superstitions and urban legends are too often dismissed as frivolous entertainments, but they are so much more than this. These monsters become part of our families, as we share them with generation after generation. They help to form our behaviors, reveal our cultural values and beliefs and inform our identities – particularly those of women. Perhaps most of all, they reveal our fears – fears not only about the monsters among us, but within us. Our lives are full of stories that have the power to reveal various truths…if we are only willing to listen.