Sonya Vatomsky is here to examine the myth of Bluebeard, Perrault’s text as a canonical work, is in dire need of retelling. Culturally, Bluebeard has found itself linked more to temptation/knowledge narratives like the Garden of Eden and Pandora’s Box than to narratives of heroic escape from monstrous kings and ogres. This in itself is an interpretation rather than a fact; in a society absent victim-blaming, Sonya asks what would we instead learn from Bluebeard? 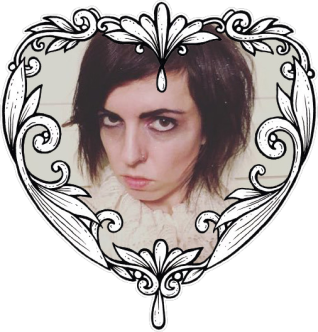 Sonya is a Russian American non-binary artist with too many feelings on the inside and too much cat hair on the outside. They are a staff writer at Haute Macabre, where they’ve covered everything from literature to music to dinnerware made out of human ashes, as well as the author of Salt Is For Curing (Sator Press, 2015).

Get in touch by saying their name five times in front of a bathroom mirror or at @coolniceghost and sonyavatomsky.com.

“In the case of revisions, the question is always, why?”

“I am all for putting new wine in old bottles; especially if the pressure of the new wine makes the old bottles explode.”

In the centuries since Charles Perrault, the so-called “father of fairytales,” published his Histoires ou Contes du Temps Passé, one of his stories has enjoyed a particularly rich life of interpretations and retellings. I am talking, of course, about Bluebeard: that serial wife-killer whose bloody chamber, despite never making it into a Disney film or other modern element of fairytale pop culture, has seen itself recreated on the screen and the page by the likes of Angela Carter, Catherine Breillat, Edna St Vincent Millay, and Margaret Atwood.

The genre of fairytale retellings is one that sees its worth debated again and again along gender lines so obvious it is a miracle any argument stands. Fairytales as part of the oral tradition were seen as women’s work; it is only after Perrault and the Brothers Grimm synthesized generations of disparate stories into quasi-official versions that we came to see these tales as immutable — and began to view their natural reinterpretation as something akin to fanfic, another oft-derided genre whose literary low-standing appears to come from nothing other than its association with women. Fairytale retellings are approached with a certain dismissiveness hinting that there is something immature in focusing on stories “meant for children” or unintellectual in using an existing framework as opposed to creating one from scratch, yet all of this dismissiveness happens alongside the movie and comic book industries’ continued co-cannibalization. What gives?

I argue that fairytale retellings are neither immature nor unintellectual but are, in fact, vital to their very nature as fairytales. And the myth of Bluebeard, especially if we approach Perrault’s text as a canonical work, is in dire need of retelling: for how is it, exactly, that a story of grisly and gruesome murders — and, incidentally, no magical elements at all save for the blood-stained key — has managed to pass itself down in history as a commentary on the dangers of female curiosity? Culturally, Bluebeard has found itself linked more to temptation/knowledge narratives like the Garden of Eden and Pandora’s Box than to narratives of heroic escape from monstrous kings and ogres. This in itself is an interpretation rather than a fact; in a society absent victim-blaming, what would we instead learn from Bluebeard?

Edna St Vincent Millay’s poem offers one lesson, setting the conflict up as a matter of trust versus Perrault’s obedience:

This door you might not open, and you did;

So enter now, and see for what slight thing

You are betrayed… Here is no treasure hid,

No cauldron, no clear crystal mirroring

The sought-for truth, no heads of women slain

But only what you see… Look yet again—

An empty room, cobwebbed and comfortless.

Yet this alone out of my life I kept

Unto myself, lest any know me quite;

And you did so profane me when you crept

Unto the threshold of this room to-night

That I must never more behold your face.

This now is yours. I seek another place.

In this sonnet, Millay not only paints Bluebeard as a sympathetic character but writes from his point of view. Here, the bloody chamber is a metaphor and the slain wives merely the skeletons each of us keep hidden in our closets. In contrast to other versions from Bluebeard’s point of view, however, this one appears to have additionally been gender-swapped, with the “betrayal” constituting a witch hunt. When the chamber is opened, no expected cauldrons or crystals are found within: its contents are Millay’s possession of self, “lest any know me quite.” In this context, entering the bloody chamber is a power play and senseless violation, emphasized the more by Millay’s sparing of the intruder’s life. Tellingly, it is the only perspective-shift retelling which does so.

Margrét Snæfríður Jónsdóttir’s 1992 essay, Madam Has a Word to Say: Power, Gender and Responsibility in Retellings of “Bluebeard”, examines the implications of such perspective-shifts in six well-known retellings, penned by four male and two female authors over more than 150 years:

The reasons some authors make Bluebeard out to be sympathetic could be as innocuous as wanting to make the story more humorous, or to put their own twist on the tales by toying with their readers’ expectations. A more worrying possibility is that it is connected to society’s tendency to sympathise with the perpetrator in cases where women are attacked. The women are often seen as hysterical and excuses made for the men, who cannot possibly be as bad as they are made out to be.

This kind of “sympathy with the perpetrator” is often found in another kind of media: the horror film. The on-screen deaths of women by the hands of serial killers must by now number in the thousands, frequently accompanied by audience cries of “don’t go upstairs!” and other reactions that confirm, at least within a narrative structure, that death is a reasonable punishment for curiosity. In horror movies, we also have the Final Girl, a trope where characters are killed off one by one until a single character, generally female, escapes. The term was coined by Carol Clover in her book Men, Women, and Chainsaws: Gender in the Modern Horror Film, which explores identification shift in slasher films. Although the viewer begins on the side of the killer, Clover argues, the one-by-one murders followed by the emergence of a Final Girl work to shift empathy towards the female victim. Final Girls have become something of an icon for many modern feminists, who view them as powerful metaphors for surviving sexual assault and other casualties of the patriarchy. Bluebeard, you could say, contains one of literature’s first Final Girls. Is this why women are so hell-bent on recreating it?

In Feminism and Bluebeard, Rose Lovell-Smith writes that Bluebeard “retains the power to require of women its own retelling.” This is nowhere exemplified as perfectly as in Bluebeard’s Bride, a new game developed by Whitney “Strix” Beltrán, Marissa Kelly, and Sarah Richardson and Kickstarted last fall. Like a true fairytale, Bluebeard’s Bride is a living interpretation: the investigatory horror tabletop RPG can be played again and again, each time to different results. Bluebeard’s Bride has participants investigating rooms, exploring the bride’s psyche through the split personas of “Sisters,” and creating their own version of the creepy tale:

Lovell-Smith’s paper refers to a “tradition of feminist Bluebeards” working to make the story’s legacy something beyond a lesson in morality. Perrault’s Histoires, we must remember, were all moral tales – indeed, the word “moral” was printed at the bottom of each story; the text accompanying Bluebeard was, “Curiosity, in spite of its appeal, often leads to deep regret. To the displeasure of many a maiden, its enjoyment is short lived. Once satisfied, it ceases to exist, and always costs dearly.” This is a bizarre takeaway in a story featuring a serial-killing husband — it makes little sense even when held up against stories with identical morals, like those of Pandora’s Box and the Garden of Eden. In both of those tales, misogynist though they may be, the curiosity “hurt” the community through the introduction of evil; in Bluebeard, the curiosity has uncovered the killer of numerous women and, indeed, a killer that the local town was not particularly fond of. In what comparable scenario is such an action scorned? Clearly, Perrault’s interpretation is so frustrating that in several centuries of retelling it, we have still not reached satisfaction. The story continues to inspire film-makers, artists, poets, and game developers to spin their own version of the tale. Perhaps eventually, the combined power of these versions will move Bluebeard from its erroneous interment in the crypt of temptation/knowledge narratives to the annals of horror, where the woman’s curiosity and tenacity is what makes her a true heroine.