Dr Marianne Hamel and Nikki Johnson take us under the microscope allowing us to gaze upon what the doctor sees in that eyepiece. The beauty of human tissue is undeniable, creating a complex interplay of light and cellular morphology in brilliant Technicolor. One of the most intriguing aspects of forensic histology being the fundamental tension between lovely images created from post-mortem specimens and the shock resulting from the realization of their source.

Marianne Hamel, MD, PhD, is a board-certified forensic pathologist practicing in New Jersey and Pennsylvania.  She is the recipient of a Brocher Foundation research fellowship in Geneva, Switzerland as well as a 2015 Fulbright scholar at the London School of Economics, Department of Law for her study of autopsy techniques and jurisprudence surrounding homicide during pregnancy.

Nikki Johnson, MFA, is a professional photographer who has exhibited widely in the US and Europe. Johnson holds a master’s degree in photography from Rochester Institute of Technology in Rochester, NY, as well as a Bachelors of Fine Art degree from Mississippi University for Women. She is a forensic photographer at the Office of the Chief Medical Examiner of the City of New York.

Forensic pathologists are physicians who perform autopsies to determine the cause and manner of death. Less well known, however, is their role in interpreting the ravages of injury and disease on the human body to answer questions like “Did she suffer? Did he know that his death was imminent? Were they aware that (insert horrific experience here) was happening?” As a result, forensic science professionals spend a great deal of time thinking about events and experiences that the general public actively seeks to avoid.  The correct interpretation of the anatomical findings can be crucial to both the criminal and civil aspects of the case. The presence of soot in the oral cavity and bronchi means the decedent was breathing when the fire started and burned alive. Brain tissue misplaced in the lungs implicates a skull base fracture that allowed bits of macerated cerebrum to enter the airway. Subcutaneous bruises of the wrists and ankles point to forcible restraint before the decedent expired. Battered, incinerated, bludgeoned, strangled, or dismembered bodies are our stock in trade; we make our living dealing with anatomic findings that others don’t want to see, or can’t handle. (Many first-time autopsy observers find that the odors associated with the post-mortem examination are what drive them from the morgue; forensic pathologists refer to this phenomenon privately as “the smell of job security”.)

Portrayals of death and dying in popular media tend to focus on gross anatomic images to shock and titillate. In our society, the consideration of death-related images as beautiful is a foreign, and, in some ways, a polarizing and deeply subversive act. Nevertheless, the brisk trade in the 19th-century sketches of the cells of the nervous system by Santiago Ramon y Cajal and post-mortem Victorian photography are indicative of a persistent current of interest in death-related art and morbid anatomy.

Advanced technology offers a new way to examine post-mortem findings. Despite the widespread popularity of the forensic sciences depicted in the media, forensic histology – or the microscopic examination of human tissue – gets little screen time. The presence of a microscope in the morgue or the office of a forensic scientist seems to be a symbol to impress upon audiences the seriousness of the science being performed in that episode. But viewers are never shown “the pathologist’s view of the world”, so to speak – exactly what does the doctor see in that eyepiece and what does it mean for the case? One of the most intriguing aspects of forensic histology is the fundamental tension between the lovely images created from post-mortem specimens and the shock resulting from the realization of their source. However, the beauty of human tissue is undeniable, creating a complex interplay of light and cellular morphology in brilliant Technicolor.

A little background: during the post-mortem examination, a pathologist may collect small pieces of tissue for further examination. Those samples are soaked in formalin for several days to “fix” the tissue – that is, to prevent decomposition and preserve cellular shapes and relationships so they can be examined later. The fixed tissue is set in paraffin by a histologist, sliced extremely thinly, applied to a slide, and stained with biochemical dyes to highlight cellular structures.  The slides are then returned to the pathologist so she can examine the tissue under the microscope to identify, characterize, or rule out disease or trauma.  Until a few years ago, the only way to see histological images in full color and high resolution was to share a double-headed microscope with a practicing pathologist. However, thanks to the recent introduction of digital microscopy the general public now has the ability to view the same images that a medical examiner uses to determine cause and manner of death.

For instance, Cryptococcus neoformans is a yeast-like fungus that was rarely seen by pathologists until the onset of the acquired immune deficiency epidemic in the early 1980s. Present in soil world-wide, the opportunistic pathogen enters a host through inhalation of air-borne spores and has the potential to cause cryptococcal meningitis by infecting the membranes surrounding the brain and spinal cord or to cause cryptococcosis, an infection throughout the body. The name “Cryptococcus” means “hidden sphere” and each round organism is encapsulated by a clear capsule made of protein and carbohydrates. The application of a special stain for protein called mucin colors the capsule of Cryptococcus red, making it easy to pick out in the liver tissue it has invaded. The presence of a widespread cryptococcal infection should spur the pathologist to ask why the decedent’s immune system is non-functional and look for evidence of HIV infection, previous chemotherapy, or a bone marrow disorder.

Another example of a disease often diagnosed at autopsy is amyloidosis. Amyloidosis is a family of diseases in which abnormal proteins, called amyloids, are deposited in human tissue and disrupt normal organ function. Symptoms of amyloidosis can include abnormal heart function, splenic rupture, enlargement of the tongue, vomiting, and/or hemorrhage from the respiratory or gastrointestinal tract. The cause of amyloidosis is, as yet, poorly understood but the non-specific symptoms can make the disease difficult to diagnose. More than a century ago pathologists discovered that amyloidosis could be identified by staining the tissue with an industrial dye called Congo Red and passing a special form of light through the microscope. This protocol caused the abnormal proteins in the tissue to glow a distinctive apple-green color.

The effects of trauma are commonly visible through the microscope as well.  Often victims of car accidents or falls survive their initial event, only to succumb days later to fat emboli. Fat emboli are a common consequence of blunt impact injuries, bone fractures, and cardiopulmonary resuscitation.  Fat is a component of bone marrow, the tissue within the pelvis, sternum, vertebrae, and ribs of adults that produces red blood cells, white blood cells, and platelets.  Bony fractures may cause the inappropriate migration of bone marrow into the bloodstream, known as fat emboli. The vast majority of fat emboli are asymptomatic and without consequence; however, a small percentage are clinically relevant and potentially fatal. Known as fat embolism syndrome, this phenomenon occurs 24 to 72 hours after blunt impact injury and is characterized by sudden-onset shortness of breath, a fine red rash, confusion and, in some cases, death. The precise mechanism with which fat embolism syndrome causes death is, as yet, unclear.

Fat emboli can be identified in the lungs by using a stain called Oil Red O. Oil Red O colors fat (normally white on histologic section) a brilliant red hue.   The use of Oil Red O identifies and highlights the fat cells in bone marrow emboli if they have migrated to the blood vessels in the lungs.  The presence of fat emboli in the lungs in conjunction with a clinical history of skeletal fractures and sudden death is consistent with fat emboli syndrome.

– All images used by permission of Death Under Glass –

If forensic pathology and histology interest you, more images and interpretations can be seen at the Death Under Glass exhibition. 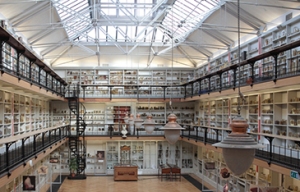 For more information about the museum or the show, please see http://www.qmul.ac.uk/bartspathology or www.deathunderglass.com.