The colors are a deep burnt umber and it becomes increasingly brown as it spreads from the center to the tawny crispy crust that holds it all together. And when I close my eyes, I can hear my mom, beaming aloud about how proud she is that she made it, telling me the story about how it was the one thing that really brought my Uncle Ted, now deceased, out of his shell. The pie was so good, that a mostly stern and quiet man would boisterously proclaim, “Jamie, this is the best damn pie I’ve ever had.” And in that way, that is the sound food makes, we hear it talk through us. 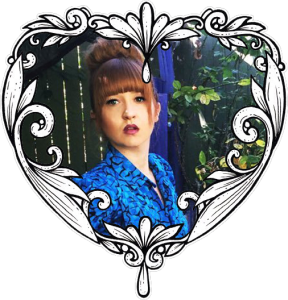 Amber is a Los Angeles based mortician and artist. She proudly works as half of Undertaking LA, a progressive funeral home encouraging families to be more involved with the body and funeral process.  In her free time she likes to sew kitschy felt toys with Harajuku flair under the pseudonym Yoshimi Dreams. She also plays bass guitar in a band called Hokusai is Alive that’s best described as, “If Prince and Radiohead had a baby.” As for her home life? Well, she has cats, she refused to say how many, just emphasized the plurality of it. They are both her reason for living, and for staying well stocked in scar gel. Her greatest struggle in life is probably the most common, desperately trying to turn off Netflix so she can get some sleep. Just one more episode. Just one more episode!

At first I thought I was going to tell a short story about my great grandmother Mabel Ann, and her famous pumpkin pie. I mean why not? Because, if you don’t like pie, get outta here! It’s amazing! Also, it’s seasonally a perfect time, with Thanksgiving just passing, and Christmas around the corner. It sort of just makes sense. However, when I sat down to write, I only got as far as describing my memory of Mabel Ann, which happens to be her impending death, and then the story fell a little flat. I realized I only had that one real memory. So, how could I write a whole story about a woman I apparently knew nothing else about? Now, a better, more fantastic, edgy writer would be able to spin that into something rather chilling and emotional. It would be this epic story about how the pie represented the true immortality of Mabel Ann and how it was her last gift to her family. And, if I were Candace Bushnell, the writer for Sex and the City, the story would definitely end with a pun about how perhaps all the women in my family were the pie. Mixed up and half-baked. A little crusty on our exterior, but sweet, with just a hint of spice on the inside. And really only enjoyed by humanity once or twice a year.

But, I’m not a better writer. I’m a normal writer. Which means when I write a story. I think its total garbage. Slam the computer shut. Pour myself a glass of wine. And then pet one of my many, many cats as I lament my own mortality and failure as an artist. And, that’s exactly what I did-six more times-until I was lead to this last copy and last nerve. The thing was, it was only after obsessively scribbling away that I realized my mistake. I wasn’t really listening to what the story wanted to be. This wasn’t simply a story about pumpkin pie, my family, or mostly importantly me. It was a story about the expression of the human experience. One that is greatly highlighted by the holidays and the food we consume during them.

Because you see, the pie is not just a pie, but also a link, to a century ago, when my great-great-grandmother Sarah Haynes created the very first one in her tiny Tennessee farmhouse. And, while I understand the danger of making a concrete statement, I’m willing to venture out and say that everyone reading this can think of at least one thing that someone in their family makes as a part of a tradition. An item that either already hearkens back to simpler or times, or sadly, one day will, after those that made said item have passed on. And, the amazing thing about food is that it so wonderfully allows us to experience all of our senses. The taste, the texture, the smell, the aesthetics, and although we cannot technically hear food, we cannot deny that most of our conversation happens over it. Food doesn’t just capture a visceral pleasure, but satisfies whatever constitutes our souls, on an incredibly deep emotional level.

Mabel Ann’s pie, that her mother created, and she perfected, has done just all of that, for nearly one hundred and seventeen years running. The pie both tastes and feels like velvet in your mouth. The brown sugar and the ginger pop on your tongue with just a hint of cloves to spice up the background. The smell is pure, sinfully warm, sugary pumpkin that envelops you. I love it because in my head it is the truest smell that winter is on it’s way. The colors are a deep burnt umber and it becomes increasingly brown as it spreads from the center to the tawny crispy crust that holds it all together. And when I close my eyes, I can hear my mom, beaming aloud about how proud she is that she made it, telling me the story about how it was the one thing that really brought my Uncle Ted, now deceased, out of his shell. The pie was so good, that a mostly stern and quiet man would boisterously proclaim, “Jamie, this is the best damn pie I’ve ever had.” And in that way, that is the sound food makes, we hear it talk through us.

And the memories that accompany this simple act of eating it? Well, in my mind I can still see myself dancing around my mother in the kitchen shoving my grubby hands into the brown box of C&H she left out. The smell of turkey and marshmallow covered yams filling my nostrils. In my mind I’m still sitting in front of the oven in utter agony, where I learned that just as a watched pot never boils, so too, does a watched pie never bake. In my mind it is also Hanukah, and there is no linear order to the years. It’s just an ebb and flow of menorahs with different hands lighting them. Different faces illuminated by each colored candle, and different harmonies of voices singing praise to Adonai while my brothers and I pathetically mimic along. And the pie, its sitting there, nestled between Uncle Franks chocolate chip cookies, my Grandpa Mel’s latkes, and my Aunt Laura’s kugel while my Aunt Stacy is undoubtedly lovingly bickering with her sister Julie about who should be in charge of serving everything and in what order. And Nikki, the fat lazy cocker spaniel is desperately nosing about the carpet, waiting for a morsel or scrap of any of the above, to fall to the floor.

So, despite all of my sarcasm and apathy for the holidays, it seems I am still able to dig down deep into my little black heart, to find that that which is the most cliché is simultaneously the most truthful. That, like a funeral, the holidays are a time for pause and reflection. They are about spending time with family and friends, and thinking about all that we are grateful for. And where food is the driving force behind sitting down and staring at one another’s ugly mugs from across the table. For my family, the pumpkin pie is our contribution to that table. And just like my grandmother, and mother I too will pass on the recipe to my own children to ensure that no holiday table ever goes without it. Just as soon as I figure out how to teach my cats to operate an oven.

I wasn’t going to make you sit through this whole essay without sharing the recipe that inspired it. So, from my table to yours, I hope you enjoy the best damn pumpkin pie you’ll ever eat.

Pre-heat oven to 425 degrees to start. Next, beat eggs in a large mixing bowl. There is no hard and fast rule about how much air you need to beat into them. Just mix those suckers up and keep moving. Next add the pumpkin and condensed milk and mix again. If you have one of those awesome Kitchen Aid mixing bowls that will make this process easier, but it can be done by hand. Next add the brown and white sugar. Notice that I highlighted the fact that you need to firmly pack the brown sugar. This is the secret to why the pie tastes so good. It’s not healthy in any way shape or form. Add the remaining ingredients and don’t fret if you accidentally put too much of the spices in, my mom accidentally added too much ginger one year and it was still great. Divide the mixture evenly into the two pie crusts. If you didn’t get the deep dish crusts then your next step is to clean the mixture that is now surely dripping over the edge and onto your counter. Bake at 425 degrees for 15 minutes and then lower the heat to 350 degrees for 45 minutes. My mother’s notes say that it has always taken closer to 55 minutes, so check the center with a toothpick before you take the pies out. If the toothpick comes up clean then pull the pies out, but if there is still clumps of pie let it cook those extra 10 minutes. When done let the pies cool and then refrigerate. Add whip cream, don’t add whip cream and then, try not to eat both pies in one sitting. Seriously, I have before. Big mistake….