Nikki Shaill, Director of Art Macabre Death Drawing salons and Drawn at the Tower, discusses the lives and deaths of two female martyrs from English history. On Wednesday evening, an event will take place inviting guests to draw these figures on the site where they were both executed and buried at Tower of London’s Chapel of St Peter ad Vincula. With guest artist Lozzy Bones and Art Macabre models bringing these women back to life. 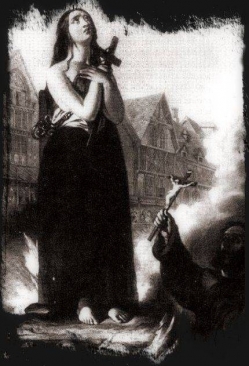 Nikki Shaill aka Raven Rouge is Director and co-founder of Art Macabre. An artist, curator and freelance events producer, she has run “Death Drawing” salons since 2010 and is passionate about the power of art as a means of exploring death, life and beyond.

It is said that the ghost of Lady Margaret Pole can be witnessed wandering the grounds of Tower of London to this day. Having suffered multiple failed hacks by a clumsy axeman during her execution, it isn’t surprising that she might want to come back and remind us of her plight, ensuring what she endured for her beliefs is never forgotten.

Executed at the age of 67, Lady Margaret Pole aka the Countess of Salisbury, is the oldest person to be executed at the Tower of London. She is probably also the oldest female held prisoner there. One of the few surviving members of the Plantagenet Dynasty after the Wars of the Roses, Margaret paid a high price for her religious convictions and loyalty to Mary over King Henry VIII. She was convicted of treason and sent to the Tower in 1538, along with other members of her family. Despite her age and imprisonment, Margaret’s conviction for what she believed did not waiver. At her trial it was reported that Margaret responded with such calmness and nobility, onlookers said ‘it was as if a man were being questioned’. Praise indeed, at the time! 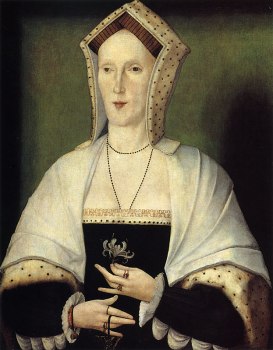 Even at the very end, Margaret refused to submit and give up what she stood for. After being held prisoner for two and a half years, Margaret was woken early one morning and suddenly taken for execution. Led from her rooms, she fell to her knees and prayed. She refused to bow and put her head on the block. The official executioner was unfortunately absent that day, leaving the role to an inexperienced and unskilled substitute who took several hacks to her shoulders and neck before succeeding in completing the bloody task.

Five years later, another female martyr Anne Askew was trialed and tortured within the Tower’s walls, again for her religious beliefs. This time a Protestant, Anne was also much younger when she suffered her plight. At the age of 25, Anne was burnt at the stake.  Before being subjected to the stake, descriptions of the horrific physical torture which Anne endured under interrogation at the Tower are enough to make anyone weak at the knees, yet Anne never backed down

There were hints at her rebellion from a young age, when she refused to take the surname of her husband when forced into marriage at the age of fourteen by her father. Anne became a famous preacher, reading and quoting from the Bible to Protestant and Evangelical men and women of all classes. Eventually the authorities had had enough and they arrested Anne in 1545 for heresy.

A fierce and fiery defender of her faith, while in Newgate Prison Anne wrote protest songs and poems. She saw herself as a brave knight fighting injustice and against the cruel tyrant King: “Like as the armed knight / Appointed to the field,With this world will I fight / And Faith shall be my shield. Faith is that weapon strong / Which will not fail at need.My foes, therefore, among Therewith will I proceed.”

Stubborn and strong to the very end, Anne refused despite all of her torture to name fellow Protestants. Her treatment on the rack was so brutal, the torture she endured so severe, that she could not walk and so had to be carried on a chair to Smithfield where she was burnt at the stake. She refused the final chance of pardon, firm to her faith until the very end.

Would you be prepared to die for what you believe in? 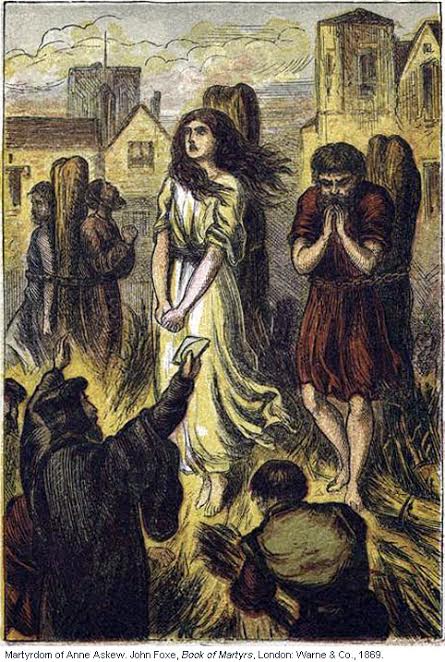 It’s possibly a question that we cannot answer hypothetically and until we had to fight for what we hold most dear, we can only imagine our reaction.

In the current political climate, we perhaps feel more than ever in our own lifetimes the strength of our convictions and how far we would be prepared to go to. As I type, friends and colleagues in the States are protesting against the injustice they feel and using their bodies and voices to physically occupy space and risking the consequences of doing so. Most of them are women. People’s emotions and strength of their conviction in their civil liberties and what is right is strengthened as it is threatened with being taken away. They are taking to the streets to campaign and protest.

Before the election took place, I saw anti-suffrage propaganda images circulated online – shocking in their content and poignant reminders to this contemporary feminist of how much we have to thank the suffrage movement for, including those who of course died for the cause.

On Sunday, the nation fell silent remembering those who have died in the name of war and peace.

Throughout history there are of course thousands of powerful stories of those who have died in the name of what they believe in. If in the name of religion, some of these people are recognised formerly by their religious authorities and elevated to the status of martyrs. Two such figures are Anne Askew and Margaret Pole, who two of four figures who our Drawn at the Tower with Art Macabre event will explore through drawing them this week.

To find out more Tales of Martyrdom and sketch figures dressed as Anne, Margaret and other martyrs within the grounds of Tower of London after dark, get tickets to Drawn at the Tower with Art Macabre here.

£24/£20 including all drawing materials