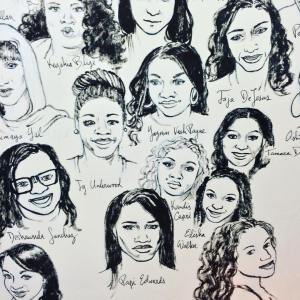 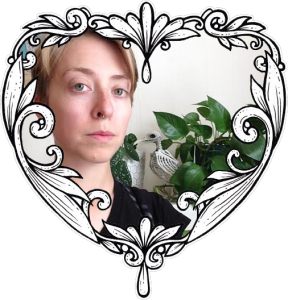 M Rich is a freelance writer, editor, and certified sexuality educator based in the PNW.  They spend a lot of time researching and writing about LGBTQ+ communities and our place in death work while dreaming about providing end of life education for queer and trans people and their families.  A poet sometimes, they are working on a chapbook that is turning out to be mostly about death, birds and breakfast food.

I was 7 years old when I realized that, one day, I would die. After watching archeologists on a National Geographic show pull a child from an ancient burial site in the American Southwest, I jumped up on the couch and clutched my chest and locked eyes with the talking heads explaining their findings. The little girl had been carefully wrapped in cloth and buried in a woven basket, curled and now so small. I thought about how I could fit in a basket, and how she must have fit the day she was placed there. I remember seeing her sunken in cheeks and thinking about my cheeks and how I could make them so big by filling them with the breath I could only breathe because I was still alive.

I thought “I look exactly like her but I didn’t look exactly like her and she was alive once and now she isn’t and I won’t be either someday.” As my socked feet sunk into the couch cushions my heart sunk too. I was now acutely aware of its everyday beat, of my alive-ness and my someday death.

What could have taken root as serious phobia of death instead grew into somewhat accepted morbid curiosity. I asked my parents about the decomposition rate of cats we buried in the front yard. By junior high I wanted to know how different diseases worked and if they were deadly, and if so, just exactly how deadly they were. As a high school student I read local obituaries every morning. I went to a liberal arts college for an English degree and, in retrospect, wrote about death more often than not. Although I absolutely maintained a low-buzz of thinking about death, I never really had a container for this energy. Death in modern American culture is shrouded in thick silence that quietly stigmatizes any discussion of death outside of mainstream funeral homes and grief counselor’s offices. Often people are shamed for being interested in death and have no safe, productive space to talk about it. 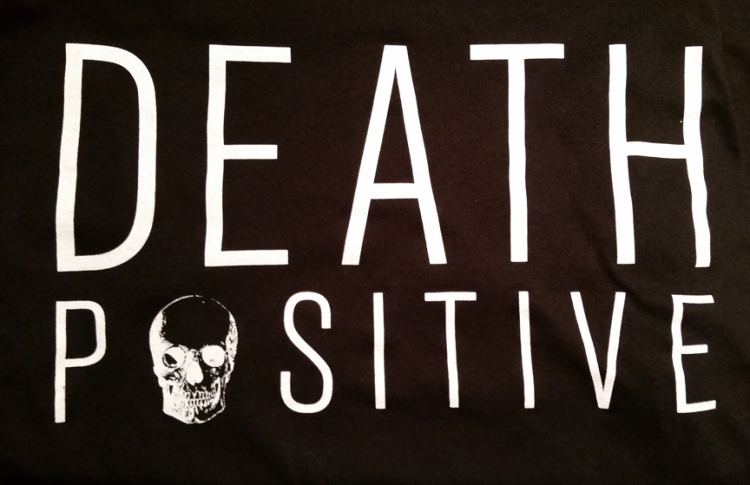 When I read Caitlin Doughty’s Smoke Gets in Your Eyes: And Other Lessons From the Crematory my sunken heart broke open. Doughty’s memoir introduced me to how we can, collectively, revolutionize our conventional ways of personally talking about and professionally dealing with death. I was finally gifted a space in which thinking about your own death was welcome, even important. A space for conversations about how we can care more ethically for dying folks, make sustainable burial innovations and offer a wider range of services for loved ones following a death (including at-home and alternative funeral care). She gave this space a name — Death Positivity — and has spent years working with other advocates, artists, academics and funeral professionals to affect a cultural shift in the way we think about death and dying. Being death positive means committing to exploring our thoughts, feelings and relationship with death and its impact on our cultural beliefs. Like other movements, death positivity creates a space for people to engage with an otherwise taboo topic in order to create personal and political change. Ensuring all people have access to fair, honest and equitable information about death and dying is a matter of justice. Allowing folks to reclaim their fear around death, or to take their loved one home for an at-home funeral is powerful social action in the face of a towering funeral industry that thrives on our collective silence and lack of education around death and dying. While it still may not feel like a mainstream movement, it is certainly growing up and out. A quick visit to The Order of the Good Death (“a group of funeral industry professionals, academics, and artists exploring ways to prepare a death phobic culture for their inevitable mortality”) will send you spinning towards museums, publications, academic talks, books, film festivals and more.

The concept of a “good death” is central to Death Positivity. A good death is shaped largely by powerful social factors, and as such will vary in definition across cultures. Generally, good deaths are ones in which a person’s end-of-life wishes are respected, they are relatively free of pain, and die in a setting that they feel is supportive and dignified. The “goodness” of a death can be in our control, even if death is not. Death positive advocates work to ensure that people can have more agency over their deaths by providing legal education, starting conversations about how doctors are trained to extend life, and advocating for cultural competence in the funeral industry. If death positive advocates seek to create a society in which more people have access to what they will call a good death, it can be assumed that death positive advocates also work to minimize the likelihood that we will face a “bad death.” While bad deaths will vary in defining features across cultures, bad deaths feature circumstances out of our control. Bad deaths are tragic, unexpected, violent. People who face bad deaths have no agency over their end of life decisions — their medical care is undignified, they are in agony, they have no family or supportive system, their body is disrespected at the end-of-life and in death.

When I hear folks talking about bad deaths I typically hear them mention tragic accidents, young people’s sudden deaths, natural disasters. Any death in which a person wasn’t expected to die and had no choice in their death or end-of-life care. Caitlin Doughty’s “Ask a Mortician” Youtube series features a video titled “Worst Way to Die?” in which Doughty discusses her own and others’ opinions of no good, very bad deaths. As Doughty mentions, often bad deaths are shaped by our personal and cultural fears. I think most people would say, in their own way, that they hope to die a good death. That they don’t suffer, that they are old, that they are loved and that their wishes and body are respected.

It is true that anyone can access a good death — many people of all different kinds of identities die in dignity with end-of-life care they choose, surrounded by people they trust to carry out their posthumous wishes. While anyone can have a good death, some are granted unearned advantages that make a good death more likely. People who have access to medical care they trust will, more than likely, be people who have health insurance their entire life. People who have had consistent access to health insurance will be more likely to have stable employment, an education, a supportive family, no or few disqualifying disabilities. You don’t have to squint too hard to see how intersecting privileges can impact and shape the likelihood that someone has agency over their death and end-of-life care.

It is true that folks with varying privileges — middle and upper class people, white people, able bodied people, heterosexual people, educated people — can still face a bad death. Accidents happen, young people get sick, people don’t have their wishes respected. But who is more likely to a face a bad death? To answer this question we have to start by understanding who is disproportionately more likely to face violence, disease, and sudden tragedy.

Black americans are more than twice as likely as white Americans to be killed by police officers. While most law enforcement encounters end with no one injured, a study from the Center for Policing Equity shows that black people are far more likely to have violent force used against them by law enforcement officers simply because they are black. Since the start of this September, 13 black people have been killed by police. Black people are more likely to experience state-sanctioned violence, as most law enforcement officers involved in these killings face no legal or professional ramifications.

Police violence is a bad death, and black people are disproportionately impacted by it. If death positive advocates seek to create circumstances in which more people can access good deaths, we must seek to dismantle white supremacy and the racist systems that devalue black lives and deaths. We cannot truly be death positive without racial justice, without a culture in which black lives matter.

Transgender people face systemic discrimination that results in unjust health disparities. One staggering example is the number of transgender women impacted by HIV. According to the CDC, among the 3.3 million HIV testing events reported to CDC in 2013, the highest percentages of newly identified HIV-positive persons were among transgender persons. In this same review, it was shown that black trans women were more likely to test positive for HIV (and more likely to not know they are infected). Trans people — especially trans women and trans feminine people of color — face systemic discrimination that makes them more likely to acquire HIV. Trans women are more likely to have negative health care encounters, experience homelessness, not receive adequate sexual healthcare education, live in poverty, not have access to clean/unused needles.

Trans women are more likely to face lifelong chronic infection because they are marginalized by a culture that oppresses trans people and devalues their health, their bodies, their personhood. While being HIV+ does not mean someone cannot have agency over their life and death in 2016 (thanks to decades of activism by HIV+ queer and trans people), it is also true that trans women will have less access to adequate healthcare, medication and infrastructure that could improve their quality of life and quality of death.

Trans women, especially trans women of color, are also disproportionately impacted by hate crime violence. In 2016, 21 trans people have been murdered for being transgender. In death, they are often mis-gendered by news media, their bodies made spectacle and sensation instead of tragedy and loss. If death positive advocates seek to create spaces in which more people can have good deaths, we must seek to dismantle the system that devalues trans lives. We cannot be death positive without trans justice.

Systems of oppression are interconnected — gender, race, class, education, ability all impact people at the same time. That means a person can be oppressed by some systems and privileged by others (if you are thinking this is a shiny and new idea please see this article to learn more about the person who coined the term “intersectionality”).

Poverty has a huge impact on how a person will live and die, and could be the topic for several books and Schools of Larger Thought. In this piece I didn’t carve space to talk about community grief in the face of systemic violence, how racial and class discrimination lead to intergenerational trauma, how mental healthcare impacts end-of-life care. Anti-black police violence and transgender health disparities are just two examples in wide, deep systems of oppression that impact people’s access to a good death.

As a newly minted death positive person, I have been struggling to find anti-oppression infrastructure in this movement. Death positivity is social activism — talking about a stigmatized topic in order to improve our quality of life and access to a good death matters. If death positive advocates are truly concerned with creating a more just culture around death and dying, we must position ourselves clearly and loudly as social justice advocates who are committed to dismantling systems of oppression that make good deaths a privilege.

3 thoughts on “The Privilege of a Good Death”